Domain Home guarantees that if a price on a stock item is lowered within 30 days of your order placement, upon request, you are entitled to receive a refund for the difference between the lower price and the actual price paid. This does not apply to merchandise that is reduced for clearance and discontinued pieces. Custom orders are not included. Coupon promotions do not apply. 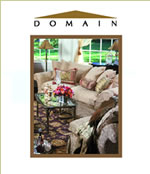 In 1709, the original Coalbrookdale Company was formed by the great iron master, Abraham Darby. Early products included items such as cooking pots and the foundry produced and laid cast iron rails in 1767 becoming the first company to make iron wheels and rails for the railroad industry. However, it is the casting and building of the iron bridge over the River Severn in 1779 which is recognized as the most prominent achievement of the Coalbrookdale Company.

By the mid 1930s another dimension to iron casting was introduced by Francis Darby. Francis had a great love of art and under his guidance, the foundry started to produce ornamental castings including tables and garden furniture as well as larger projects such as the "Hyde Park" gates and railings.

In 1929, the Coalbrookdale Company became a subsidiary of Allied Ironfounders Limited and continued to produce the castings for a wide variety of products including domestic heating and cooking appliances such as the Aga. Today, the foundry continues to manufacture these quality, cast iron cooking instruments.

The foundry in Coalbrookdale is responsible for producing all the castings for Aga and every product reflects the heritage and traditional craftsmanship that sets Aga apart. The complete process of casting and enameling takes place at two sites - the Coalbrookdale foundry and the Aga factory in Ketley, six miles away.

The raw materials used at Coalbrookdale are scrap iron and pig iron which are melted down at temperatures of 3,272 DEG F. Before it has a chance to cool down, the molten metal is poured into moulds. The castings are then removed from the molds and left to cool. The castings are then shot blasted and moved to the dressing department where rough edges are removed. The castings are then transported to the Aga-Rayburn site at Ketley where they are then annealed and blasted with iron shot at 72lb a square inch before being filed by hand. This prepares the castings for the enameling process.

Aga cookers have a vitreous enamel surface because it is long-lasting, scratch resistant and the color doesn`t fade. Vitreous enamel is a mixture of molten glass, clay and pigment that is permanently bonded onto cast iron at very high temperatures to form a tough, gloss finish. All the colors are produced from metal oxides and the entire enameling process is done by hand. The whole procedure takes three days.